MP Khalil Al- Saleh said the law regarding cashing annual leave will be presented to the Council of Ministers next Monday for approval, while at the same time praising the efforts of Minister of Justice Jamal Al-Jalawi to push for its approval and speeding procedures to submit it to the National Assembly for approval, reports Al-Qabas daily. In a telephone conversation with Al- Saleh, Minister Al-Jalawi is said to have confirmed that the decree of the Civil Service Commission to allow employees to cash their annual vacations has the approval of all parties, but has to be presented to the Cabinet for approval during its next meeting scheduled for Monday. Al-Saleh explained the amendments to be approved meet the proposal “we submitted to allow cashing vacations and/or give the employees the right to cash balance annual leave.

Meanwhile, as part of the campaign for the preparation of the second semester, which will start on March 6, the administrative sector of the Ministry of Education has completed the procedures of hiring about 400 new teachers (via local contract), and is continuing to complete the procedures for the rest of the applicants who successfully passed the interviews, in coordination with the Public Education Sector, given that the required number of teachers is about 900, reports Al-Rai daily.

According to an educational source, the total number of expatriate, Gulf, and Bedoun teachers contracted during the last academic year exceeded 1,100, and job grades were provided to them by the Civil Service Commission. The source said, “The administrative sector has also completed the procedures for employing about 900 cleaners. Interviews are ongoing to hire the required number and fill the grades assigned by the Council of Ministers, amounting to a total of 2,100 job grades. “The audit of employee statements in the ministry’s general office has been completed. Job promotion decisions are being issued for those eligible. Educational zones are still auditing their employees’ statements, and decisions of those entitled to them will be issued no later than March 31”.

More talks on expats over 60s. 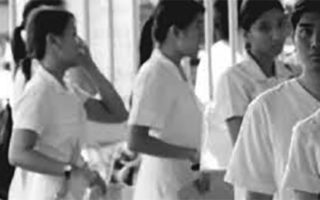 Why no ad published to recruit nurses; Tenders ‘mishandled’.

‘Screen’ stipend for Kuwaitis only.