The Kuwaiti Government decided on Monday to bar holding all kinds of peoples’ gatherings in closed places effective next Sunday until February 28. The decision will be re-examined in light of the epidemiological conditions in the country, the official Twitter account of the Government Communication Center said. Moreover, the Cabinet decided to oblige all incoming travelers to undergo a PCR test 72 hours ahead of arrival in the country — as of Tuesday.

Kuwait on Monday said 982 more people tested positive for COVID-19 over the past 24 hours, taking the country’s caseload to 419,314, health ministry data showed. Some 171 more people recovered from the viurs to up the number of those to have overcome the disease to 412,073 according to ministry spokesman Dr. Abdullah Al-Sanad, adding that the recovery to positive case ratio stands at 98.3 percent. The death toll from the pandemic remained unchanged at 2,468, while 35 people are hospitalized with the virus, eight of whom need intensive care, he told KUNA. Some 22,491 swab tests were conducted over the last day, out of a total of 6,025,332 so far, added the spokesman.

The Kuwaiti ministerial committee in response to the novel coronavirus (Covid-19) met at Seif Palace on Monday — chaired by Deputy Prime Minister and Minister of Defense Sheikh Hamad Jaber Al-Ali Al-Sabah. The committee weighed the latest reports on the local, regional and international epidemiological developments of the fresh virus variant of omicron after significant increase in the infection cases.

Prior
Kuwait’s Ministry of Health announced that people who are above 50 years of age and had two shots of Covid- 19 vaccine are able to receive a booster jab without a prior appointment as from tomorrow Monday. Younger people have to book an appointment for receiving the booster dose, Spokesman of the Ministry Dr. Abdullah Al-Sanad told a press conference on Sunday. Vaccination is available at the medical centers of Jaber Bridge, Mishref and Jleib Al-Shuyouk youth center as well as public hospitals countrywide, he said.

Dr. Al-Sanad noted that 115,024 people have got the booster jab over the last week, bringing the overall to 461,693. Kuwait embassies in Germany, Spain and Italy have advised their nationals to return to the homeland due to the unprecedented rise in the Covid-19 omicron variant cases. In three separate press statements, the Embassies said Sunday evening that the surge in Omircon cases might lead to re-imposing new measures, including full lockdowns and travel restrictions. The embassies stressed the necessity of abiding by Kuwait’s Foreign Ministry’s call to the nationals for adjourning travel and not leaving the country at present for their safety amid instable health conditions in Spain, Germany and Italy as well as the world’s countries, the statements said. The embassy in Germany urged its nationals who might need any enquires to contact the consular section, which works around the clock, at the telephone No: 00491608973000, according to the statement.

Meanwhile, Kuwait embassies in Spain and Italy appealed to their nationals, in case of any enquires, to call the consular sections which work at the clock at the phone No: 0034656665555 and 0034651111116, and +393922900000 and +393428598765 respectively. Kuwait Embassy in France also advised its nationals to return home due to the spike of infections with coronavirus omicron variant in France. In statement on Sunday, the embassy reminded Kuwaitis of the call of the Ministry of Foreign Affairs on the Kuwaiti nationals who plan to travel abroad to postpone their travel for the time being. The unstable health situation around the globe could require re-imposition of lockdowns and travel restrictions, it noted. The Kuwaiti citizens living in France are advised to contact the consular division of the embassy if need be, via the phone numbers: 0033670673834 and 0033147235425, according to the statement.

The Chairman of the Supreme Advisory Committee to Combat Coronavirus Dr. Khaled Al-Jarallah, said the omicron infections are on the rise locally and in the Gulf, reports Al-Qabas daily. In the face of this Dr Al-Jarallah has called for stricter measures to be taken and activating all health-related protocols to the maximum to slow down and contain the rate of infection and its effects including what he called ‘preventive isolation’. 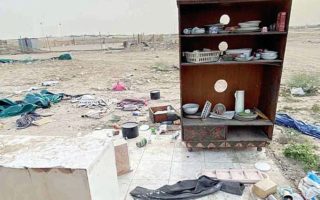 30 US soldiers test positive for coronavirus in Kuwait