Without such a statement, the amnesty would not have been granted. Amnesty is not the goal in itself, as it is a step towards national reconciliation and achievements in the interest of citizens, he asserted. He went on to say that His Highness the Prime Minister Sheikh Sabah Al-Khalid informed him about handing over the resignation of the government to His Highness the Amir, so the premier and the ministers will not attend Tuesday’s session.

For this reason, the speaker will adjourn the session. Consequently, the Assembly removed all the grilling motions from the agenda of the session. The previous government can still attend the upcoming legislative sessions until its successor is formed. In another development, Chairman of the parliamentary Interior and Defense Affairs Committee MP Saadoun Hammad disclosed that they discussed two bills with the representatives of the Interior Ministry on Monday. Hammad said the former government submitted one of these bills – amendment of Nationality Law number 15/1959; particularly Article Eight, in order to change the period before a non- Kuwaiti woman married to a Kuwaiti can apply for citizenship from five to 18 years starting from the date of marriage. He added he submitted the other bill – allowing a non-Kuwaiti woman whose Kuwaiti husband died to obtain citizenship even if she did not apply when her husband was alive. He revealed the committee asked the Ministry of Interior to submit its reply to both bills in writing, affirming that deliberations on these bills will continue in the next meeting.

Meanwhile, Deputy Speaker of the Assembly Ahmed Al-Shuhoumi recently met the team of engineers conducting research on building a space rocket in the country. He stressed the importance of supporting the team, especially since many countries are currently doing research about space. He added that if none of the existing institutions is supporting the team now, the Assembly will present a bill on the establishment of an institution for conducting and supporting research about space.

Fish markets to open from Monday 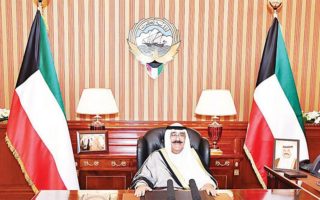