MP Abdullah Al- Mudaf has submitted a proposal to cancel Kuwait Mosafer application, such that travelers will only be required to present a negative PCR test result and covid-19 vaccination certificate. He suggested cancelation of the Shlonech application as well, and for the concerned authorities to be satisfied with certificates issued by the Ministry of Health and accredited health centers. MP Hamad Al-Matar also called for the cancellation of Kuwait Mosafer application rather than evaluating it; as it has been proven to be a failure and caused many problems for citizens. Commenting on the clashes between citizens and security officers during a demonstration at Erada Square where the citizens expressed objection to the compulsory vaccination against corona, MP Abdulkareem Al-Kandari said this cannot be considered an individual action. He believes this is part of the systematic action adopted by the Ministry of Interior.

Action
MP Abdulaziz Al-Saqaabi holds Minister of Interior Sheikh Thamer Ali Al-Sabah responsible for such action. He argued that freedom of expression is the right of citizens guaranteed by the Constitution. On another issue, Al-Saqaabi asserted the KD10 billion budget deficit entails finding alternative sources of national income; instead of depending on oil. He suggested some alternatives like increasing revenues collected from renting State properties and industrial plots, as well as imposing tax on huge companies and combating corruption.

In another development, the parliamentary Education, Culture and Guidance Affairs Committee has approved 66 out of 68 bills. The committee postponed approval of the two bills untill it receives the government’s opinion on some technical issues related to higher, private and public education. Committee Chairman MP Hamad Al-Matar disclosed that they discussed the full resumption of official working hours and employees’ attendance in public institutions on Aug 15. He pointed out this decision contradicts the previous directive to reopen nurseries by the beginning of September, considering families are in dire need of nurseries for their children while they are at work. He inquired where the parents will send their children if the nurseries are closed, especially the families with disabled children. He confirmed the committee is keen on supporting the return to normal education plan, asserting that making students stay at home for a long time is more dangerous than coronavirus.

Workshop
He said the committee will organize a workshop for teachers on Aug 22 at the National Assembly theater. He revealed the registration for the workshop started Sunday and it will end on Aug 18, affirming that specialized lecturers will conduct the workshop. Also, in his capacity as Environment Affairs Committee chairman; Al-Matar unveiled the committee’s plan to organize a workshop aimed at raising public awareness on environmental issues. He said this is considered a big leap in the work of parliamentary committees.

Meanwhile, MP Talal Al-Sayer has proposed exempting Kuwaiti mothers with children who are below five years old from the resumption of full working hours in public institutions until the reopening of nurseries and until the domestic workers return to the country. A number of MPs, including Hamad Al-Matar, supported the proposal. In the meantime, MP Abdullah Al-Turaiji urged Minister of Finance and Minister of State for Economic and Investment Affairs Khalifa Hamada to pump fresh blood into Kuwait Credit Bank (KCB). He said the dismissal of senior staff, including Director General Salah Al-Mudaf, has become a public demand. He added that Al-Mudaf did not fulfill the promise he made in 2019 to grant housing loans to citizens. 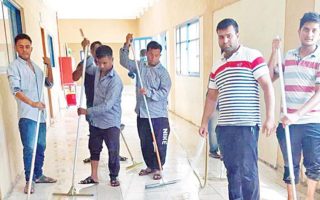