National Assembly Speaker Marzouq Al-Ghanim has confirmed receiving Decree No. 139/2021 to end the first round of the 16th parliamentary term on Thursday. He said His Highness the Crown Prince Sheikh Mesha’al Al-Ahmad Al-Jaber Al-Sabah and His Highness the Prime Minister Sheikh Sabah Al-Khalid Al-Sabah signed the decree, which will be included in the agenda of Thursday’s session. He pointed out that Article 89 of the Constitution grants HH the Amir the right to end ordinary and exceptional parliamentary rounds. He added Article Two of the decree mandates HH the Prime Minister to inform the Assembly about it, indicating the decree will be published in Kuwait Gazette. He went on to say that he received five proposals to hold special sessions, affirming that he will invite the government and MPs to a special session on Wednesday.

He denied the allegation that the government will issue decrees of necessity to impose tax, asserting such claims are mere lies which reflect the ignorance of those behind them. He cited Article 71 of the Constitution, stating that the decrees of necessity issued during the period between two parliamentary rounds must be referred to the Assembly for approval within 15 days; otherwise, these decrees will be considered null and void. If the Assembly rejects a decree of necessity, it will be nullified. Claims on the issuance of decrees of necessity against the citizens’ interests are aimed at intimidating the people, he added.

Proposals
On the proposals to hold special sessions, Al-Ghanim said they cover many topics like the privileges granted to the disabled; obstacles to the implementation of housing projects; victims of real estate fraud; and reports of the Interior and Defense Affairs Committee on the proposals to amend the Elections Law, number of constituencies and law on establishing the Administrative Section at the First Instance Court. He then confirmed that all these items will be included in the agenda of the special session scheduled for Wednesday.

Earlier, the 31 MPs Bloc met in the house of MP Muhammad Obaid Al-Rajhi to consolidate their position on the special session slated for Thursday. Al-Rajhi confirmed the attendance of 28 MPs, stressing that the bloc is united and it has adopted a unified principle — to protect the Constitution and rights of citizens. The lawmaker pointed out the critics who claimed that the bloc is suffering from cracks in its positions on various issues will be proven wrong as the coming days will affirm that the bloc is solid. Coordinator of the bloc and former MP Bader Al-Dahoum said the government attended the session on approving the State budget and voted from outside the Assembly Hall, which means the government attends sessions according to its whims.

The citizens will see whether or not the government will continue refusing to attend sessions just because some MPs occupied the seats allocated for ministers, he asserted. MP Mehalhal Al-Mudaf affirmed the bloc is persistent in its demand to discuss the grilling motions against His Highness the Prime Minister. He said the bloc remains firm in its stand against the decision to protect the premier against grilling for almost one and half year. In another development, MP Hesham Al-Saleh forwarded queries to Minister of Foreign Affairs and Minister of State for Cabinet Affairs Sheikh Ahmad Nasser Al-Muhammad on studies which stressed the need to rationalize expenditures due to the current economic situation. He requested for detailed reports on the budgets allocated for furnishing the offices of ministers, undersecretaries, assistant undersecretaries and senior officials; and copies of relevant tenders and contracts signed for this purpose. On the other hand, MP Ahmed Al-Hamad submitted a proposal to establish a memorial for the victims of the terrorist attack on Al-Sadeq Mosque in 2015. He also suggested naming streets after some of the victims in order to immortalize them in the memory of the nation. 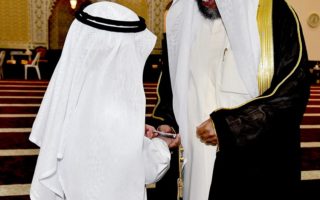 Kuwait’s past Eid customs…simple and spontaneous. Kuwait’s cash reserve with the IMF remains same as end of last year.

Engineers to work as teachers.