Despite the corona crisis hitting the country for several months, the gold market is currently experiencing an unprecedented recovery, as it recorded a tremendous hike in the price of this precious metal which can be called unprecedented in Kuwait’s history, reports Al- Seyassah daily.

In addition to the gold shops in Kuwait making a brisk business, some sites on social media have also been active in selling used gold.

The Al-Seyassah daily polled a number of gold store dealers and economic analysts, who indicated that the high price of gold in Kuwait is a reflection of its global rise. It also polled consumers who were buying and selling gold. Gold dealer Michael Ibrahim said the profits of gold merchants, especially stores, do not come from the rise or fall in the price of gold, but their basic profit comes through workmanship and explained the price of what he called ‘grammering’ starts from 2 dinars upwards depending on the level of quality and skill of the piece’s workmanship.

Gold trader Ashraf Mahmoud says that there is a state of recovery currently in the gold market, where many expats prefer to sell, while citizens accept to buy as a result of the ‘Corona’ crisis that caused many expats to sell their jewelry to pay for accumulated rents or for a living.

As for the citizens, most of them buy, and there are those who sold gold to benefit from the current high price. Zayed Fayez says he came to the gold market to sell his gold ring due to the current high gold prices because he ran short of money after losing his job recently. Salam Awad added gold is the best investment as it is considered a strategic stockpile for some well-to-do families as they sell it during hard times, indicating that gold demand has been very high in the recent months.

He pointed out that gold prices in Kuwait are affected by its price globally and the traders have no income in this return, explaining that the ounce of gold was sold last March at $1,400 and now it peaked at 1,800 dollars. He pointed out that the price will not decline in light of the corona crisis and because of some tense political situation in the region.

Visas issued prior to closing of airspace renewal and validity 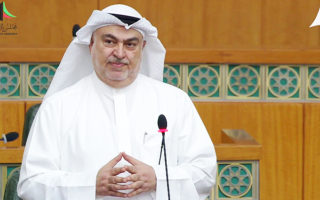 Curfew 9pm -3am … taxis from Tuesday

Talks set to sensibilize 60-plus rules.

870 new surveillance cameras to be installed at KIA.