Like many Americans, President Donald Trump on Monday gazed at the first solar eclipse in a century to cross the continental United States, coast to coast. But at one point he appeared to ignore precautions that scientists and doctors warned were necessary to protect people’s eyes during the celestial event.

Trump emerged on the Truman Balcony of the White House with first lady Melania and son Barron shortly before the eclipse reached its apex in Washington. He waved at the crowd and responded to a reporter’s question – “How’s the view?” – with a thumbs up, according to the White House press pool. 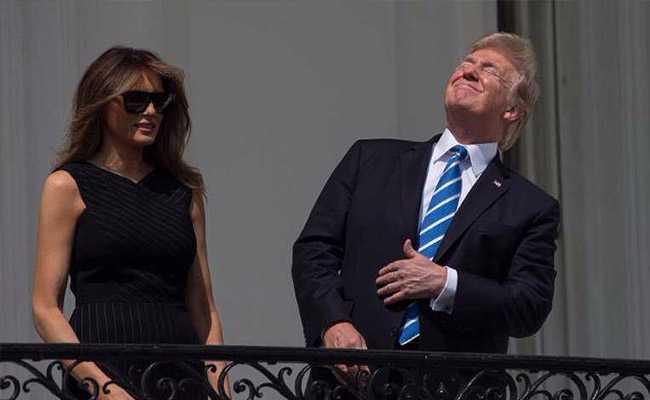 Then he tilted his head upward and pointed toward the sky, prompting a White House aide standing beneath the balcony to shout, “Don’t look,” according to the press pool. It is unclear if Trump looked directly at the sun.

As Blaine Friedlander wrote in The Washington Post, the first rule of enjoying a solar eclipse is to never look directly at the sun without eclipse glasses, because it could damage the eyes, advice that Trump’s daughter Ivanka also gave her Twitter followers.

According to NASA, “Looking directly at the sun is unsafe except during the brief total phase of a solar eclipse (‘totality’), when the moon entirely blocks the sun’s bright face, which will happen only within the narrow path of totality.

“The only safe way to look directly at the uneclipsed or partially eclipsed sun is through special-purpose solar filters, such as ‘eclipse glasses’ … or hand-held solar viewers.”

Staring at the sun can cause a condition called solar retinopathy, which leads to a decrease or a distortion of a person’s central vision, according to Sveta Kavali, an ophthalmologist and retina specialist at Saint Louis University.

“That damage is typically irreversible, and there’s no treatment for this,” Kavali said in a Saint Louis University video about viewing the eclipse safely.

Trump eventually put on special viewing glasses and watched the social eclipse for about 90 seconds.

The eclipse was the first since the founding of the republic that passed directly over only this country, and it traversed a 3,000-mile path, from Oregon through Idaho, Wyoming, Nebraska, Kansas, Missouri, Illinois, Kentucky, Tennessee, Georgia and North Carolina, before finally disappearing off the coast of Charleston, South Carolina, at 2:49 p.m. Eastern time.

The solar eclipse’s journey from coast to coast was over in 90 minutes.

With 5% VAT from January 1, trips to UAE to cost more

Dying At home Rather Than In Hospital, Elderly Japanese ‘Go To The Afterlife Quietly’