Older Entry 200 arrested in Britain for overstaying visas, Indian nationals among them
Newer Entry Madras one of the best places to watch today’s solar eclipse, too bad it’s not in India

An endangered one-horned rhino which was swept across the Nepalese border into India by flooding has been rescued and brought home.

The young female rhino was found 42km (26 miles) from the Chitwan National Park in the Indian village of Bagah.

Four more rhinos from the park need to be rescued and one was found dead after devastating flooding in the area.

Monsoon rains have caused widespread damage in Nepal, Bangladesh and parts of India in recent weeks.

Nepal’s Chitwan Valley – home to the park which houses more than 600 rhinos – has been badly affected. Last week dozens of elephants and rafts were deployed to rescue nearly 500 people trapped in the area. 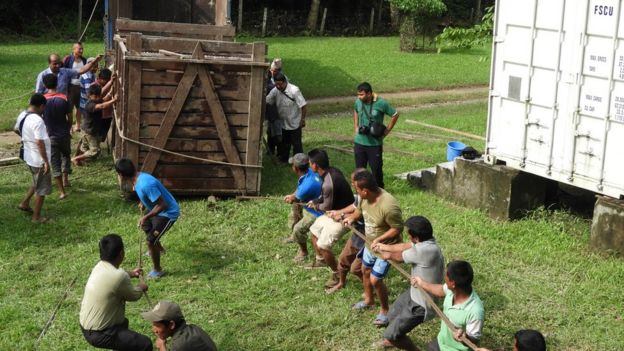 A 40-strong team worked to bring the rhino home 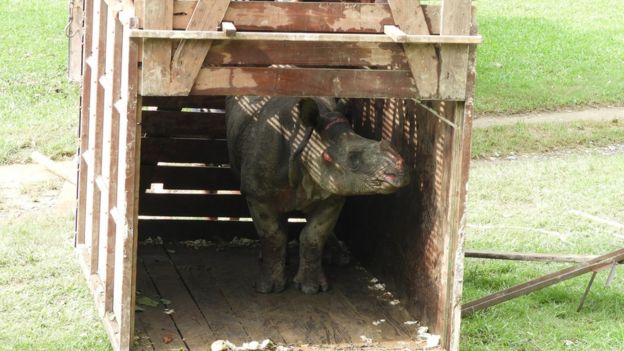 A team of 40 Nepali officials were deployed to bring the two-and-a-half year old rhino home from India.

“We were able to bring the baby rhino back with the support of Indian forestry officials,” the park’s Deputy Warden Nurendra Aryal told BBC Nepali.

“Hundreds of Indian people came to watch the rescue.”

The rhino, found at a sugarcane farm in an Indian village, was tranquilised using a dart and brought back in a truck, he said.

Of the four rhinos still missing, officials say two are inside the protected tiger conservation area in Valmikinagar in India, which borders the Chitwan district.

Two others are in sugarcane fields in the nearby Nepali district of Nawalparsai. Another two-year-old rhino was found dead on Tuesday morning.

Mr Aryal said that the two rhinos in India would be rescued after the flooding subsided.

The monsoon season, which starts in June and ends in September, causes floods across the region each year.

In India’s Assam state, six rhinos are reported to have drowned after monsoon flooding at the Kaziranga National Park.

Older Entry 200 arrested in Britain for overstaying visas, Indian nationals among them
Newer Entry Madras one of the best places to watch today’s solar eclipse, too bad it’s not in India

Mom rides 1,400 km on scooter to bring back son stranded in lockdown

Watch: Woman Runs Across Wobbly Bridge. Seconds Later, It Is Swept Away