Older Entry Dog Jumps Into River, Man Dives In To Save Him. Then, This.
Newer Entry Pictures of man catching a big fat fish in Mumbai’s flooded streets go viral

According to reports by the Directorate General of Civil Aviation (DGCA), between January and April 2017, close to 5.12 lakh domestic passengers in India faced issues due to airline companies denying boarding, as well as flight cancellations and delays. Airline companies have paid their passengers compensations of over Rs 22 crore for various inconveniences during the first four months of this year.

Akanksha Anshu, Co-Founder and Managing Director of passenger’s right protection and compensation management company refundme.in says, “Airlines allow passengers to book their seats beyond availability to avoid operating flights with unoccupied seats. However, when you are barred from boarding a flight without prior notice, it leaves you stranded and causes a great deal of inconvenience.

Passengers are increasingly affected by overbookings, delays and cancellations  ..

Airlines are shelling out large amounts of compensation for these issues that leave passengers stranded and inconvenienced. 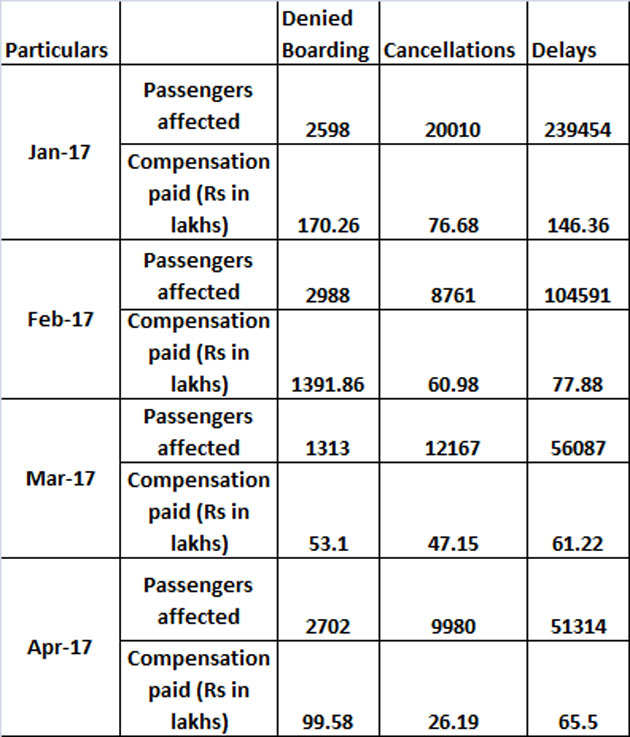 With the monsoon all set to begin by July-September, cancellations and delays are expected to rise. Here’s what you need to know as a passenger, in order to make the best of these situations.

Check your eligibility
If an airline refuses to let you board your flight, you need to figure out whether you are eligible to claim compensation. Anshu explains, “You can claim compensation from airlines for being denied boarding, if you are holding a confirmed ticket at the time of boarding and you are present at the time specified by the airline.”

What to do if you’re denied boarding
Rishabh Beria, Managing Director at Janus Aviation says, “The airline is not liable to pay any compensation if they arrange for an alternate flight scheduled to depart within one hour of the originally scheduled departure time.”

However, if the airline fails to do so, you can claim compensation. “For denying boarding, airlines have to provide monetary compensation to passengers in cash or through bank transfer, or if the passenger agrees, in the form of travel vouchers,” says Anshu.

What to do if the flight is delayed or cancelled
The airline is liable to provide compensation or facilities if it expects a delay beyond the actual scheduled departure time or revised departure time.

Captain Archit Gupta, CEO of Atom Aviation Services says, “If a flight is delayed by less than 24 hours, the airline has to provide meals and refreshments to passengers. If the delay is exceeds 24 hours, hotel accommodation and transfers must be provided.”

If a flight is cancelled, passengers should be informed at least two weeks before the scheduled date of departure and the choice of a refund or alternate flight should be offered to them. But if the airline operator fails to inform them, they have to be compensated in addition to receiving the refund of the air ticket price, in accordance with DGCA guidelines.

However, Gupta says, “No financial compensation will be paid to those who have not provided adequate contact information while booking the ticket.”

Compensation for being denied boarding
Here’s what you can expect if you are not allowed to board the flight.

Compensation for delay or cancellation
Here’s what you can demand if your flight is delayed or cancelled.

Daniel D’souza, Head of Sales, India and NRI Markets, SOTC Travel, adds, “If they need to travel urgently, and their flight is delayed or cancelled, passengers can also ask to be accommodated on a different airline’s flight. The airline would then bear the additional cost.”

However, airlines are not obligated to pay compensations if the delay or cancellation is caused by bad weather, political unrest, a natural disaster or labour disputes.

Know your rights
It’s important to stay informed about the refund policies of your airline for delays, cancellations, being denied boarding, loss or damage, or delayed arrival of baggage. Also, find out about their grievance redressal procedure.

Beria says, “Passengers should use AirSewa, a grievance redressal system that was launched recently by the government. It can be used to report any grievances related to the Civil Aviation entities in the country.”

Refund process
The refund process is fairly straightforward. The airline is mandated to follow the civil aviation requirements issued by the DGCA. The compensation has to be paid in cash, bank transfer or travel vouchers, according to the preference of the customer.

Older Entry Dog Jumps Into River, Man Dives In To Save Him. Then, This.
Newer Entry Pictures of man catching a big fat fish in Mumbai’s flooded streets go viral

New Saudi tourist visa: Everything you need to know

The Palestinian dessert few can enjoy

Swimming in the train? Taipei turns metro car into pool for Universiade 2017

20 Places In India That Are So Gorgeous, They’ll Make You Look Like A Professional Photographer

Peek inside the luxury hotel on wheels