Do not leave homes – Water clogging in many areas.

The Ministry of Interior called on citizens and expats not to leave their homes unless it is absolutely necessary due to heavy rains the country is witnessing currently. The MOI called on motorists who are currently on the road to exercise caution and not to hesitate to call emergency number 112 or 1804000 for civil defense operation or Traffic department for assistance.

The Meteorological Department forecasted, Sunday, the continuation of moderate-to-heavy rainfall on most areas in the country, along with heavy thunderstorms during some periods. The department stated to KUNA that the rains are expected to last until midnight where it will be decreasing gradually with a chance of fog on some areas. It also added that it has reordered, up until 10 a.m., rainfall depth of 34 mm in Kuwait Airport station as well as Sabah Al-Ahmad area. As for Al-Abdali, north of the country, it recorded 32 mm, and Al-Jahra 28 mm. The department mentioned that Al-Salmi and Al-Adami west of the country registered 27 mm. Furthermore, Al-Salmiya recorded 24 mm, Kuwait City 22 mm, Kaifan 21.3 mm, Al-Jabriya 16.5 mm, Al-Rabiya 23.85 and Al-Nuwaiseeb 12.8 mm.

Competency tests eyed for 20 professions for all expatriates.

Ramadan traditions in the time of coronavirus. 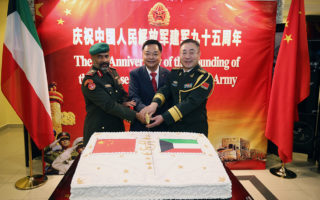 Twenty-one MPs side with no-confidence.

Clarification by PAM about new transfer procedures from Govt sector to Private.

Amendment rumoured on over 60’s.