Dr. Biswaroop Chowdury, World Guinness Book Record holder and who is also the Patron of IKFS inaugurated the event.  Dr. Chowdury said that every Indian should be proud of their own mother land. He added while saying that the Covid-19 pandemic has grabbed the world by its collar. India is currently the worst-affected country, not in terms of the total number of confirmed cases but as the biggest hotspot in the world. The pandemic is spreading to more and more villages of the country where medical healthcare facilities are non-existent. The death toll has been rising with India recording maximum daily deaths in the world due to Covid-19.

His team has carried a substantial works and helped thousands of people in his native country Calcutta while interfering with the Health authorities and supporting the patients who are affected severely by Covid 19 pandemic disease.

Dr. Sami Bubere, Chief Patron of IKFS and a nominee of  Honorable President of India First Court Member National University M A N U U. Hyderabad and  Member  Government of India HRD ministry’s NCPUL) made a key note address  about the 5 achievements made by the Modi Government during the past few years.

Dr. Abdul Razzaq Rumane, who is professionally and Engineer and author of several books related to construction and engineering management also spoke about the achievement made India during the past 75 years or since independence. Dr. Rumane pointed out that the ‘Azadi ka Amrit Mahotsav’ will infuse new energy and new consciousness among the countrymen.

Dr. Bubere  said that The Goods and Services Tax (GST) was in the pipeline for 17 years before it became a major tax reform in 2017. For long, India was seen as a non –friendly country for business owing to its complicated tax laws. The GST subsumed 17  existing indirect taxes to make compliance of taxation laws by the business world simple. Also, The Modi government enacted the insolvency and Bankruptcy  Code (IBC) law in 2016. The law was later amended  to make it more attuned to ground realities.

IKFS  Founding  President Dr. Ghalib Al-Mashoor, Ph.D,  chaired the zoom event.  Dr. Al-Mashoor  quoted while saying by  our Prime Minister said today , on the pious festival of the Amrit Mahotsav of freedom, the country is bowing to all its freedom fighters and brave heroes who continue to sacrifice themselves day and night in the defense of the nation. The country is remembering every personality, including the revered Mahatma Ghandi (Bapu), who lead the freedom a mass movement.

Dr. Al-Mashoor, holding 2 Doctoral degrees  from the Universities in Paris and USA said that from the  Battle of Plassey in Bengal in  the year 1757, Tipu Sultan’s Seringapatam battle in South India in the year 1799 and  to the massive revolt in 1857 against the British armies was led by Muslims,

“The contribution of Muslim revolutionaries, poets and writers is not known today. Similarly, little is known about the contribution of people like Ali Musliyar and Bi-Amma, who made significant contributions,” it was the ruler of Bengal Siraj-ud-Daulah, who first fought and lost to the British in 1757, which became a cornerstone for the imperial power to colonize India., even after losing this battle, there were many rebellions led by Muslims until 1850. Despite Siraj-ud-Daulah ‘s best efforts, along with an Indian prince Raja Mahender Pratap Singh, Sindhi, and Maulvi Barkatullah had established the exiled government of India in Afghanistan in 1915., Those contributions were not been included in the official Indian history.,

“The movement picked up around the same time when Subhash Chandra Bose, was allying with Germany and Japan to oust the British from India. While Bose is celebrated nationwide, not much is known about Muslim freedom fighters,”   It is very unfortunate that, there is no adequate coverage of the role of the Indian Muslims in the national movement.  IKFS urged to add  and include the contributions of Muslims in the school and college syllabus, so that new generation can identify the role of Muslims in India’s freedom struggle to get independence from Foreign terrorist British rule in India.

Sudhakaran, Secretary, IKFS  expressed vote of thanks who earlier introduced the distinguished guests in the beginning of the program.

SACAA Kuwait “Fun in The Sun” – A successful family picnic

IKFS Condoles for the demise of Amir of Kuwait. 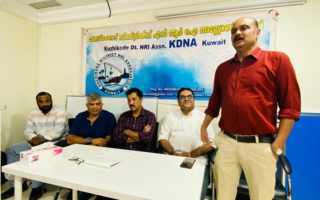