‘Shun rumors, get your jabs for society’s safety’.

The Cabinet on Monday appealed to people to receive the anti-coronavirus vaccines to maintain safety of both individuals and the society. This came during the Cabinet’s weekly meeting held at Seif Palace, under chairmanship of His Highness the Prime Minister Sheikh Sabah Khaled Al-Hamad Al-Sabah. It urged people to ignore all rumors and untrue information circulated about the vaccines, in light of the spread of the disease and its rapid repercussions that require concerted efforts of all as a common societal responsibility. This will help curb the transmission of the infections, Minister of Health and Acting Minister of State for Cabinet Affairs Dr. Basel Al-Sabah said after the meeting.

The Cabinet decided to allow citizens and close relatives as well as accompanying housemaids who had taken the first jab of the anti-virus vaccine to pass through land and maritime exits as of tomorrow (Tuesday). Twitter official account of the Government Communication Center said the decision would be valid until July 31 (2021). It added that the Cabinet decided to open the land and sea borders for those who had taken the two jabs of the accredited vaccines — Pfizer, AstraZeneca and Moderna — or one jab of the vaccine Johnson and Johnson effective August 1.

The Cabinet declared the beginning of direct flights to Bosnia and Herzegovina, Britain, Spain, the US, The Netherlands, Italy, Austria, France, Kyrgyzstan, Germany, Greece and Switzerland as of 1/7/2021. In the same context, Dr. Basel made a presentation to the Cabinet on the latest developments relating to the coronavirus at local and international levels, in light of the new variants and the rise in infections all over the world. He also briefed on the Cabinet on the situation of the virus in Kuwait, in light of the latest data and statistics that show the rise in infections and patients at hospitals. Meanwhile, the ministers were briefed on a presentation made by Minister of Finance and Minister of State for Economic and Investment Affairs Khalifa Hamada, CEO of Kuwait Investment Authority Farouk Ali Bastaki and Acting Undersecretary of the Ministry of Finance Aseel Suleiman Al-Munifion the State’s financial position on June 28, 2021.

The Cabinet voiced its satisfaction about the Kuwaiti economy’s state and the results of the unprecedented general performance of investment. It expressed appreciation to the efforts made by officials of the Ministry of Finance and authority in order to preserve, manage and develop these assets. The Cabinet listened to a presentation made by Interior Minister Sheikh Thamer Sabah Al-Sabah on the details of killing a Kuwaiti woman and policeman Abdulaziz Al-Resheedi. The minister informed the Cabinet about the arrest of the killer who passed away while taking medicine. The General Department of Relations and Security Media at the Ministry said earlier that the killer was apprehended after gunfire exchange, and was immediately transferred to hospital but died effected by gunshot wounds.

‘No side effects, deaths from vaccine’. 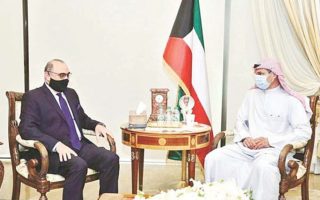 Get vaccinated while sitting in the vehicle.

Why PAM decision not enforced? Details on 60s issue sought.

Impose fees on Kuwait Airport, KD 3 for departures and KD 2 for arrivals from June 1, 2021.