“BANGARU BATHUKAMMA” a socio cultural event was held in Kuwait on 13th of October 2016.

Telangana’s prominent women’s group welcomed the guest of honor Ms. Kalvakuntla Kavitha and her team at the Hilton Resort as the day event began.Ms. Kalvakuntla Kavitha along with the women present, made beautiful flower stacks and arranged the flower pyramid with various unique seasonal flowers with medicinal values that were imported from Telangana region to Kuwait. She sang folk songs while arranging seven concentric layers of the different colored flowers in the shape of temple gopuram along with NRIs of Telangana and Kuwaiti women’s group. While making bathukamma Ms.Abhilasha Suresh interviewed her, which was telecasted on regional television channel of Telangana and on all Jagruthi organization websites. The preparing of Bathukamma ended with traditional Bathukamma dance.

Later part of the event commenced at the Touristic Park Abbasiya Auditorium, wherethousands of Telanganites from across Kuwait were present. The gathering was warmly welcomed by hosts Mrs. Vijaya Nirmala Yadav Nair and Ms. Abhilasha Suresh, as they set the mood for the special evening.

Welcome speech was given by Mrs. Vijaya Nirmala Yadav Nair and Dr. Hyma Reddy briefed the gathering with the introduction of Bathukamma and its usage in our daily lives. It was followed by video visuals of the movie ‘LIFE AGAIN” – an inspirational story based on life of Dr.Hyma Reddy, a cancer survivor and Yoga Instructor at the Kuwait Cancer Center.

Telangana Jagruthi Kuwait Souvenir was released by the chief guests followed by Kavithakka addressing the gathering. In her message she spoke about the importance of Bathukamma and its upliftment for keeping the local traditions and cultures alive. TJK president Mr. Vinay Muthyala, also thanked the distinguished guests, event Sponsors, TJK team and all attendees for the enthusiasm and support for the event.

Mr. Pavan Reddy Kallem gave the vote of thanks and the event was concluded by singing of the Indian National Anthem. At the end of the event delicious traditional Telangana food was served to the gathering. 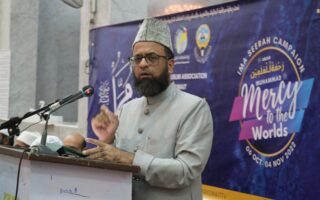 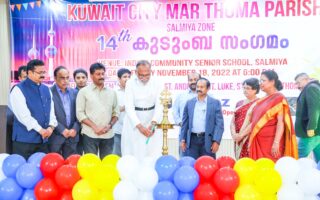